What to Know About Armed Security During a Lawsuit - Secure Guard

What to Know About Armed Security During a Lawsuit - Secure Guard 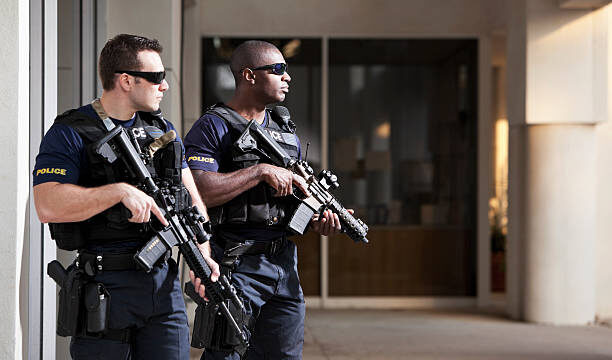 Securing the parameter during a lawsuit is crucial if you want a smooth trial without any complications. The tensions inside a courtroom are usually high, and things can get ugly quickly. At the time of a proceeding, everyone on the premises is vulnerable to physical harm.

Hence, with the rise in conflicts stirring amongst the perpetrators, along with an array of objectionable statements that lead to a heated situation, it is no surprise that there is an imminent need for armed security during a lawsuit. This is why, you will find both, armed and unarmed security at a proceeding.

Appointing On-duty personnel is simply not enough to prevent a hostile environment inside the courtroom. This is why the infrastructure and design of most courthouses focus primarily on security features. For example, the entry into the courthouse has a metal detector to ensure that no one, except for the authorities and law enforcement is armed.

Along with X-rays and detectors, closed-circuit security cameras are present to monitor all the activities that happen inside the courtroom. Keeping a close eye at every second allows security to prevent threats.

Potential Objects that can be used as a Weapon in Court

Even though the parties and jury inside a courtroom are not armed, there is always a possibility of physical harm. On certain occasions, the tempers inside a court tend to skyrocket and the heat of the moment causes the confrontation to turn physical.

In this instance, rage-fueled people could use courtroom furniture and everything they can find as a weapon. The list of items that they can use as a weapon can be very long if you take into account all the items that can hurt you. These include:

However, a courtroom can also address these risks by either, rearranging the furniture settings inside a courtroom, or getting rid of a few items that have the most potential to hurt the other party. Other measures include locating the armed security close to the defendants so that they are readily available to neutralize an outbreak.

Hire Armed Security inside or outside the Courtroom

Other times, security officials with firearms can have full access inside and outside the courtroom. These are instances when the case involves an individual who is under severe threat and requires additional protection. Furthermore, high-profile cases that involve government officials or influential people often require armed security in the courtroom.

The Need for Armed Security during a Lawsuit

A lawsuit will oftentimes emerge from a conflict of interest or an unjust or illegal act, and there could be plenty at stake. For example, big corporations can lose millions over a lawsuit. Family lawsuits, in particular, can cause an individual to lose their lifelong earnings and resources.

Some lawsuits can also result in property loss. Many people have lost their houses over a lawsuit, which is why the animosity between two parties can soar beyond control. The motives to harm keep on pilling on as the case keeps on extending. Many powerful individuals will also use their influence to threaten a weaker individual. Hence, armed security personals under these circumstances can operate in ways that not only prevent harm and complications but also contribute to a fair trial.

Hiring private security services during a lawsuit will help you deter any complications. Secure Guard Services can help with providing you the best services, specifically for a lawsuit.