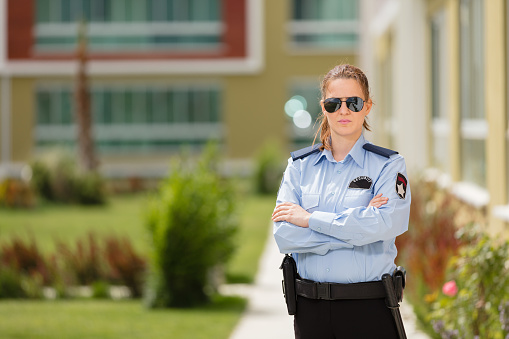 Women of the workforce have always had to face the stigmatized backlash for performing duties that do not coincide with their supposed gender roles. This is why, women and the security officer industry is a controversial subject to address. Even though the last couple of years have seen great progress in terms of empowering women, a resolute and certain change is still yet to come.

The gender gap is still very much alive and thriving in certain industries, and one example of that is the security industry. The gender difference is not unique to the security profession, however, it is still increasingly evident. The field of professional security is still largely male-dominated, much like many other enforcement agencies.

The difference is so incredibly vast, that many people have turned away from the thought of having female security personals and do not consider them to carry out this job effectively. However, many security companies are now realizing that this is a problem and are implementing approachable ways to introduce women into the security workforce.

Moreover, even businesses now require individuals that can manage conflicts and altercations in better ways. Since women are generally superior in terms of social skills, the idea of diversifying the security industry is beginning to have an appeal.

Even though one of the key tasks of a security officer is to neutralize a threatening situation using physical force, they must also have the skills to communicate and resolve an issue in calm and collective fashion.

Sometimes, instances can occur where there is a big conflict, yet physical aggression is not a requirement. This is when women can be a more reliable choice since they have the skills to use moderate approach to resolve a conflict. Their enhanced communication skills, along with empathetic qualities, allows them to use neutralize a heated situation before it can build into something intense.

Like many of the other jobs, the women in the security industry do not expect their time as security officer to be smooth sailing. Instead, they are often met by many sexist remarks and they have to withstand male superiority in many of the occasions. This means that many times, a female worker will be working under older male security officers.

These officers have dominated their positions as security heads and for many years, managed a male dominated security force. Therefore, they have trouble adapting to work alongside a female coworker. Women in security have to make extra efforts and push through some of the uncomfortable moments and make their presence worthy of respect and acknowledgment.

Unlike men, women that work security have to earn the appreciation of the other security personals by showing them that they can perform the same job just as responsibly as the rest. Nevertheless, once a female establishes her presence amongst the rest, then this hurdle of unfamiliarity and awkwardness is no longer a problem.

The benefit s of having women security guards is immense. To start, women have certain qualities that are amazing for security work. These qualities include critical decision-making, empathy, leadership and understanding. In the face of an uncomfortable situation or confrontation, qualities such as these can be instrumental.

A men’s physical superiority and stature can help break down ad neutralize forms of aggression, while a women’s emotional intelligence and conversational skills can prevent acts of aggression from escalating in the first place.

Another benefit amongst endless others is screening duties. Many times women are uncomfortable and do not consent to male guards touching them for screening purposes. This is where having a female security guard can be incredibly beneficial.

Many people raise arguments against the women that want to work security, which have no merit and you can easily categorize them as part of a myth. Myths such as these dismiss a female from ever succeeding as a security guard.

One example is that some believe the female physique does not favor the security guard position. However, this argument fails to realize the dynamic and multidimensional duties of a security individual. They are not just bouncers, and have to fulfill plenty of other tasks that do not require physical strength.

Another myth is that women cannot work 24/7 security. This is a generalized point, and many women have no trouble doing night security duty.

Women are just as efficient as men in the security industry, and the world must popularize, and normalize the roles of female security. They can work with the same vigilance, expertise, and professionalism of any experienced male security officer.